Rivers are one of the important sources of water, without rivers civilizations did not exist and you can take out your history books and notice most of the ancient civilizations existed beside rivers. Be it Indus Valley Civilization or be in Egyptian Civilizations rivers played a major role in these civilizations.

Rivers are a common source of water and also an easy and quickest mode of transport and many rivers are present all over the world. India is home to several rivers and one such river that flows down on the Deccan Plateau of India is Krishna.

Krishna River is the 4th biggest river in terms of Water inflow and river basin area in India which is almost 1288 km long. The other 3 biggest rivers in India are the Ganges, Godavari, and the Brahmaputra.

Krishna River is one of the major source of irrigation to the states of Maharashtra, Karnataka, Telangana, and Andhra Pradesh.

Originating in the Western Ghats near Mahabaleshwar, the Krishna river origin point is at an elevation of about 1,300m above sea level and is located in the Indian state of Maharashtra. The river flows through some of the agriculture suitable basins in India where 75.6% of the Krishna River Basin is in cultivated land because of water availability.

The source of the river is located at Jor village in the extreme north of Wai Taluka, Satara District, Maharashtra and it flows through the state of Karnataka before entering the state of Telangana and finally passing through Andhra Pradesh and drains at Hamasaladeevi (near Koduru) in Andhra Pradesh which is located at the banks of Bay of Bengal. The delta of River Krishna is most fertile and Vijayawada is one of the largest cities located at the banks of Krishna River.

The Course of Krishna River

Krishna river has over 28 tributaries out of which Tungabhadra River is the largest Tributary and Bhima River is the longest tributary. 3 of the tributaries of Krishna River are considered holy places which include Sangli where Panchganga, Warna and Yerla rivers meet Krishna River, the second holy place being Kudalasangama where Krishna and Malaprabha river merge and is considered a holy place for the Lingayat sect of Hindu Religion and the third being Sangameswaram where Tungabhadra and Bhavanasi rivers join Krishna River.

Krishna River basin is one of the fertile basins where you can find soil types such as black soils, red soils, laterite, and lateritic soils, alluvium, mixed soils, red and black soils, and saline and alkaline soils. The largest basin is located in the Indian state of Karnataka which is around 113,271 km2. The river covers at least 8% of the total geographical area of the country.

Places and Temples Near the River

Being one of the 4th largest rivers in the country, the river flows down various parts of 4 states that it covers and is home to many wildlife parks, and sanctuaries. The rich sanctuary where Krishna River flows is declared as Krishna Wildlife Sanctuary and is home to various animals and birds such as Fishing cat, otter, Estuarine crocodile, spotted deer, sambar, blackbuck, snake, lizards, and jackal.

One of the major sources of irrigation, Krishna River is a lifeline river to the cities and villages of many states in Southern India. On the course of the river, you can find many holy cities and pilgrimage sites where the first holy place that you can find is the town of Wai in Satara District which is known for Mahaganpati Mandir and Kashivishweshwar temple.

Dams Constructed Across the River 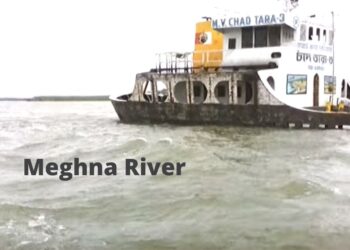