One of the most intriguing places on Earth is Ethiopia. Traveling here would take you back for at least 7 years as the Ethiopian calendar has 13 months instead of 12 months. The country has scenic landmarks, history, wildlife, and amazing places to visit. However, it is one of the places where you can get to time travel backward.

The Ethiopian calendar is largely intertwined with biblical anecdotes and has names for weekends and months. For instance, the first day of the week is called Ehud which is the first day according to Ge’ez language, it is day that signifies that it is the first day when God started to create the Earth.

The calendar system starts with the idea of Adam and Eve who lived in the garden of Eden for seven years before they were expelled from their sins and as per the Bible, God promised to save them after 5500 years.

The Ethiopian and Gregorian calendars both use the birthdate of Jesus Christ as a starting point for their calculations. The difference between the two calendars is because alternate calculations are used in determining this date. The Ethiopian Orthodox Church believes Jesus Christ was born in 7 BC, 5,500 years after God’s promise to Adam and Eve.

Not many cultures in the world follow the old form of calendar except they chose Gregorian calendar however, the Ethiopian calendar year comprised of 1 month extra to that of the Gregorian calendar. So much so that the country celebrated the new millennium on September 11, 2007, and this is due to the extra month in their calendar.

While the first 12 months have 30 days, the last month, called Pagume, has five days and six days in a leap year.

However, till today not many Ethiopians are confused between 2 calendars as most of the Ethiopians are aware of the Gregorians calendar and some even use both the calendars interchangeably.

Ethiopia, being one of the few countries in the world, still uses its calendar system. The country celebrates some important holidays on days that are different from the rest of the world.

The Sad and Disturbing Truth Behind Mother Teresa

The real name of Mother Teresa was "Anjeze Gonxhe Bojaxhiu". She was born on August 26, 1910, in the former Yugoslavia (now the Republic of Macedonia). She came to India in 1929. Mother Teresa was a Catholic nun who settled in the slums of…

Was Coca-Cola Originally Green in Color?

This railway station was closed for 42 years because of a girl! Do you know the reason? 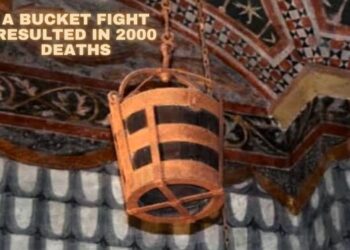 War of the Bucket: a Bucket Fight Resulted in 2000 Deaths