Charminar, meaning “Four Minarets”, was built as a mosque and major tourist attraction in Hyderabad, India, and an essential for anyone visiting the city known for its Biryani!

Charminar is one of the most iconic monuments of India and it gets the name from the fact that it is based on four minarets meaning char minars in Persian.

The monument is known to people all around the globe and is a famous place to visit amongst tourists visiting the Southern parts of India. The beautiful example of the Mughal architecture lies in the east of the Musi River.

To the northeast of the monument lies the famous Laad Bazaar and to the west is the beautiful and pretty famous Makkah Masjid which is also famous for being a very sacred monument in itself.

The monument was constructed in 1591 AD by Sultan Muhammad Quli Qutb Shah who was the 5th ruler of the Qutb Shahi Dynasty that ruled the southern parts of India and the city was known as the Golconda kingdom which we know as Andhra Pradesh in India.

The Charminar was built to commemorate the eradication of the plague that was spread in the kingdom at that time.

The ruler was quite worried about the plague which was turning to be fatal for his kingdom and vowed of erecting a mosque at that very place where he was praying if the plague ended.

While laying the foundation stones of this monument in 1591 AD he prayed and asked from Allah to bestow peace and prosperity on his kingdom so that people learn to exist peacefully together and without any hassles.

He was an ambassador of humanity and had a tolerance for people following all faiths.

Charminar is a masterpiece of Qutub Shahi architecture and is surrounded by the colorful shops of Lad Bazaar (Choodi Bazaar).

The monument was built in 4 large arches, which face in 4 different directions. Charminar o has 4 tall minarets and a mosque on its top floor.

These thin minarets and their spiral staircases add to the splendor of the monument, square in shape and decorated with fine ornamentation.

The mosque has 45 covered prayer spaces, as well as open spaces for prayer. Do you know Charminar is popularly known as “The Arc de Triomphe of the East“? Each side of the monument has the measurement with 20 m and each edge has a pointed high minaret.

The 4 minarets reach a height of 48.7 m and can be seen even kilometers from the monument. There are 4 stories in each minaret, which look like delicately carved rings around it.

All sides of the Charminar open in a square of giant arches. Each arch has a width of 11 m and is approximately 20 m to the top. There is a clock in each of the arches, which were installed in 1889.

Charminar has 2 galleries in its complex, one in the other. The terrace is surrounded by a stone balcony and is vaulted below, which makes it look like a dome.

The Charminar fluted minarets were built in the main building and have winding steps inside.

These steps lead to the upper floor, which offers stunning views of the entire city. Charminar has exceptional beauty at night when it is fully illuminated. 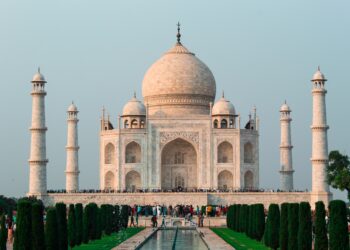 What makes Taj Mahal one of the 7 wonders of the world?