We are lucky to have so many rivers in Karnataka, the state consist of Rivers due to its geographical location, Western Ghats, Coastal Regions, and many other reasons.

Most of the River water is used for drinking purpose, agriculture, Industry and used as a source of hydroelectric power, and are used for transportation in some areas.

Most of the rivers come from the Western Ghats and head towards the east direction of the state. These are some of the largest rivers in the state and flow into the Bay of Bengal. As a result, almost all major rivers in the east are inter-state rivers.

The rivers are mainly classified into 3 main river basins, such as Krishna basin, Kaveri basin, Godavari basin, and others. Here is the information on the list of rivers in Karnataka:

Most of the south part of India depended on the Krishna River for their cultivation, drinking water, and other hydro-projects. Apart from these even many species living in Wild-life Sanctuaries where the water is flown. It has 28 tributaries where Tungabhadra is the largest river.

Kaveri River is one of the 7 major holy rivers of India, a very important river for drinking water, irrigation, hydro-electric power, and agriculture. The rivers flows from western ghats and make the way to the ocean along with many other rivers crossing different states.

Malaprabha River from a holy place situated in the Western Ghats, the river flows and joins the Krishna River. The Navilatirtha Dam is the major dam constructed across the river. It has multiple tributaries as mention above.

Bhima River is a tributary of the Krishna River passes through different states and helps farmers in their agricultural land to grow crops. There are many holy places and dams cover on its way covered in detail in a separate article link is given below.

Tungabhadra River flows through southern states and finally joins the Krishna river, the name actually formed with 2 rivers namely, Tunga and Bhadra these both rivers meet at Koodli, Bhadravati. The river passes across many holy places which make it sacred water, people take bath to worship God near the river.

Even though the river originate in Maharashtra it flows into North Karnataka regions, this river is not pure and not suitable for agriculture aswell hence it cannot be used for drinking purposes, and faces lot of problems when floods arises. It just flows 150 kms approx but still it damages more in flood situations.

Arkavathi River is a tributary of River Kaveri originate in Nandi hills Chikkaballapur and flows towards the surrounding areas of Bengaluru. Previously it was the main source for natives living in this place but because of encroachments by the city, the river dried up in most of the places on its way.

The Suvarnavathi River that originates from Mysore is one of the southern tributaries of the Kaveri River. This river is also called Honnuhole (Honhole). The river is used for various purposes such as drinking water, agriculture, and many more. People visit Suvarnavathi Reservoir to have a beautiful view as a day trip. 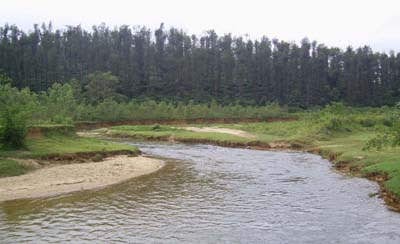 Hemavati River is one of the tributaries of the river Kaveri originates in Chikkamagaluru district, a dam is built across the river called “Hemavati Dam” which helps people for their livelihood. There are some tourist attractions near the river such as Shettihalli Rosary Church, Paravasudeva, Yoganarasimha Temple, etc.

Harangi River is one of the tributary of River Kaveri, it originates on Pushpagiri hills in Kodagu district. It is one of the famous tourist spots in monsoon season, people visit to see river flows from the hills. A dam is built across Mysore-Kodagu border that facilitates water for agriculture locally.

Dams: One is at Hiriyadka and another one is at Shiroor.

As the other states of India participated in the National movement, even Andhra Pradesh has been deeply rooted in saving the motherland. The fight for freedom is a widely discussed topic that has been covered by several articles. In this article,…